Wholemeal olive and rosemary bread from the breadmaker

Have you ever thought about making your own bread? Either by hand or in a bread maker?  No? OK, I know I’m at risk of coming across as completely unrealistic and totally out of touch with reality so please bear with me.

First of all I’m aware that bread makers can be pricey and aren’t within reach of everyone’s budgets. Secondly, I can hear you thinking ‘Erm, I’m a parent, I sometimes don’t have time to be washing my hair let alone baking bloody bread, especially when I can pick it up so easily!’

So in my defence:

Price: I bet you there’s a LOT of people, some within your reach via social media or friends and family that have one sitting in their cupboard collecting dust that they’d be willing to give/sell and there’s always bargains to be had on Ebay, gumtree, Facebook selling sites etc so it’s worth having a look to see what you can get one for.

Time: with a bread maker I’d say that it takes me less than 3 minutes to put a loaf on either to bake right then or on a timer so it’s ready when we wake up in the morning. Making your own without a bread maker can be timely, but a soda bread can be knocked up pretty quickly as there’s no kneading involved. My husband, a complete bread baking novice, managed to knock this bad boy up in about 10 minutes (plus baking time) and it was SO delicious. 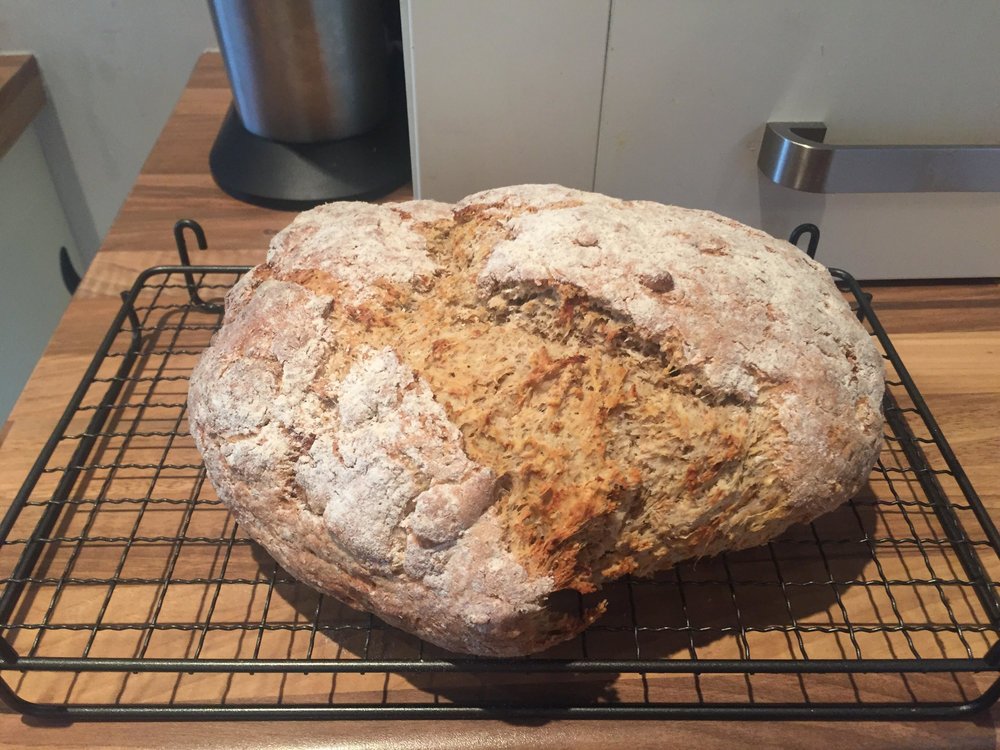 Soda bread (a Tom Kerridge recipe that is available online)

I wanted to write about bread as I’ve seen/heard people saying bread isn’t ‘proper food’ and stating they either don’t give it to children or that they feel bad giving it. It’s true that bread isn’t necessarily the most nutritious of foods and it shouldn’t be your ‘go to’ carbohydrate at every meal but there’s certainly nothing wrong with eating it as part of a varied and balanced diet.

Avoiding bread because you/your little one don’t enjoy it, or it’s just not part of your diet is fine, as there’s a wealth of alternative carbohydrates you can give. However, purposely avoiding gluten completely is not only unnecessary (unless you are a coeliac or have gluten intolerance) but there’s evidence to show that by avoiding giving it to children from 6 months you’re actually increasing their risk of coeliac disease which is completely counter-productive!

That being said, like so many food items, lots of shop bought breads are very highly processed without a great deal of nutritional value and have salt and sugar added to them in varying quantities. For example a shop bought loaf can have anything from 0.2-0.8g or more of salt per slice – that’s 20 – more than 80% of the maximum an under one should be having in an entire day in one slice of bread. So if you’re giving cheese/ham/beans or something else high in salt with the bread you could easily be hitting the daily allowance in once meal.

What can you do?

If you’ve got into the habit of using bread on a daily basis try to think of other things you could be using instead: cous cous, potato, sweet potato, pasta, crackers/oat cakes, rice or grains such as bulghar wheat. (Do bear in mind that some food items such as rye and quinoa may have too much fibre for very small tummies when they first start the weaning process).

Have a look at the label on the bread you’re using and when you next go shopping see if you can find one that contains as little sugar and salt per slice as possible.

Providing your baby is growing well and has a good appetite choose a wholemeal bread that contains more fibre, B vitamins and folate than the white varieties. (For babies who do not eat well, the extra fibre can make them too full and prevent them eating enough calories throughout the day.)

Choose healthy accompaniments – if you find it difficult to use other options instead of bread, try to make sure you’re giving good quality proteins and some fruit or vegetables with it… sandwiches think egg & tomato, hummus & roasted veg/grated carrot, tuna & yoghurt or maybe a nice thick soup or scrambled egg and mashed avocado on toast. There are loads of options when you put your thinking cap on.

Finally, reasons to make your own:

·         You can control the amount of salt/sugar you add. Avoiding it completely for your children ifyou want

·         You can use a bread maker to make pizza bases, brioche, cakes, jams and other things too

So, if you’ve been thinking about doing this then definitely do… if you’ve never even considered it then I hope I’ve made you think a little about trying it yourself! If you do give it a go please send pictures and reports on your trials!

PrevPreviousYoghurt: a great weaning food but they are not all created as equals!
NextInstilling good eating habits in your children (weaning and beyond!)Next

This error message is only visible to WordPress admins